Welcome to the Dolphins in Paradise Blog

Dolphins in Paradise has become for me a preferred state of mind.
This blog is about co-creating an on-line space where people can share,
and perhaps remember, our connections to our cetacean allies
and the feeling of upliftment and sense of community which is the result of that. In my recent visit to FL, I also visited the Clearwater Marine Aquarium, a marine mammal rescue center, that is currently home to a tailless dolphin named Winter. While we were there, we witnessed her being fitted with a new prosthetic tail. Winter was found as a baby by a fisherman in the month of December (hence her name). She had gotten tangled up in the lines of a crab trap cutting off the circulation in her tail. After her rescue the tail gradually fell off.

She has learned to swim without it, swimming more with the side-to-side movement of a shark and using her flippers to get moving. During her fitting she rested quietly on a submerged underwater platform.

Winter has recently acquired deva status when she starred in a movie called Dolphin Tale, along with Morgan Freeman. The movie is due to be released in the fall of 2011.
Posted by Karin at 2:40 PM No comments:
Labels: tailless dolphin, Winter 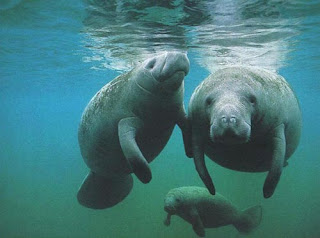 The West Indian manatee of Florida frequently migrates up rivers and brackish water estuaries to freshwater springs. We found a large number of them congregating in the warmer spring water of Kings Bay near the end of Crystal River in FL, about an hour and a half driving time north of Tampa.

An adult manatee is anywhere between 10 and 12 feet long and weighs up to 4,000 lbs. Using a large flexible upper lip, they feast primarily on mangrove leaves, turtle grass and various types of algae. With their thick, wrinkled skin and soft bodies, it is believed that their closest living relative is the elephant. They have a large, flat paddle-like tail.

Most of their time is spent sleeping, surfacing for air at intervals of about 20 minutes. We saw many of them quietly lying on the bottom. They are generally slow moving and somewhat timid but a several of them seemed to enjoy being scratched underneath their chins. One of the babies actually gave me a big kiss on my scuba mask.
Posted by Karin at 1:53 PM No comments:
Labels: manatee 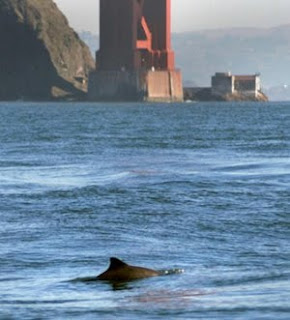 A private team of researchers are observing the movements of more and more porpoises as they make their under the Golden Gate Bridge and into the bay. It seems they are following their prey but once inside may be intrigued by the large amount of crab and other fish that seem to be present these days. The porpoises, who can live up to 12 years, are a good sign of the overall health of the bay—positive news in a time of pessimism over other environmental calamaties.
Posted by Karin at 4:57 PM No comments:
Labels: porpoises
Newer Posts Older Posts Home
Subscribe to: Posts (Atom)

Karin
Check out my book — Dancing on Water: Adventures with Dolphins, Whales & Interspecies Communication. Then come with me to the Caribbean to hang out with a pod of bottlenose dolphins . . .

Search This Blog for Related Links